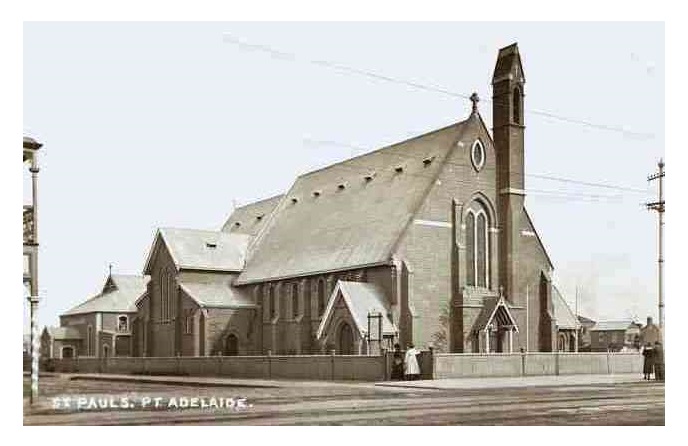 The first religious services for the members of the Church of England [Anglican] were held in the Customs House sheds in conjunction with the non-conformists of New Port, as the area was then known.

The Revd Charles Howard and the Revd James Farrell who were both at one time incumbents of Holy Trinity Church, North Tce, Adelaide, conducted services on a weekly basis.

The original building of St Paul’s Church was a wooden structure built upon piles to overcome the mud and high tides, being close to the Port River. The first pile was driven by Captain Charles Sturt in January 1841 which eventuated into a church being opened for divine worship on 9 May 1841 at a cost of 400 pounds.

The following information has been transferred from the historical and technical documentation researched by
Shield, David. OHTA (September 2013). https://www.ohta.org.au/organs/organs/PortAdelaideAng.html

The current building is the third to occupy the St Vincent Street site. After the earthquake of 1902 it was felt the church needed significant renovation and as a result of a significant gift from Mr Z. Tysack, a new building was mooted. To a plan of architects English & Soward (who also designed the Soldiers Memorial Hall at Tanunda, now the Barossa Regional Gallery), W.C. Torode, the builder of additions to St Peter’s Cathedral and St George’s Church, Goodwood, was the successful tenderer.1 Demolition of the old church began immediately,2 the foundation stone for the new church laid on 13 May 133 and the opening services held on Wednesday 1 November 1905. The organ was stored and renovated by J.E. Dodd at a cost of £100.

The church, which is of Gothic design, is being built of brick, with a nave, 65 ft. long by 38 ft. wide, and a chancel, 35 ft. by 24 ft. The building is entered by two porches, one each on the east and west sides, with a baptistry under the double windows facing the St. Vincent streetfront. The chancel has a three-light window, Christ and His Saints, which, together with the two-light window over the baptistry, are the largest works of Percy Bacon Bros of London in Adelaide, both being additional presents from Mr. Tyzack. There was provision for a clergyman’s, men’s, and boys’ vestries and a lofty organ chamber. The St. Vincent streetfront is enhanced by a lofty bell turret.4 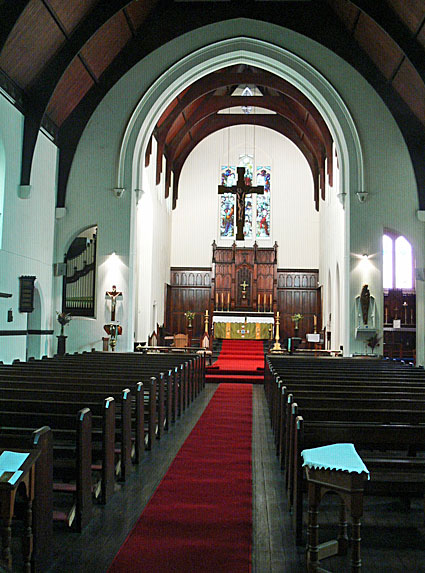 The organ at St Paul’s in Port Adelaide was originally a single-manual instrument built by W.C. Mack of Great Yarmouth, England. Acquired in 1865, it was placed in the second church to be constructed on this site and, like the church, it has seen many changes.

St Paul’s Church of England was the third Episcopalian church to be built in South Australia. A weatherboard structure built on piles, it was opened in May 1841 and followed the construction of Holy Trinity and St John’s Halifax Street, both in Adelaide. 10 years later, plans were developed for a new building. It was to be in the Lombard style, “a plain building of brick and stone, 60 feet by 30 feet, and for which they had a contract of £720”.5 At the laying of the foundation stone in April 1851,”a neat and elegant model of the Church, was exhibited by Mr Stuckey, the architect.”6

The first church was successfully moved backwards 30 feet to allow the new church to be built. The Bishop had sort security that the building would not collapse with this operation, however he could not counter the force of nature. At this time, areas of Port Adelaide were subject to occasional inundation caused by a combination of the tides and weather conditions . In June it was reported that: The old wooden church, called St. Paul’s, was washed off the piles, and a good deal smashed; but as the new one is fast approaching completion, this disaster is the less to be regretted.7

The Bishop opened this second church on Sunday 14 March 1852. It was incomplete, with unbleached calico being substituted for windows.8

In February 1861 it was felt necessary to enlarge the church. Built in the same style, the new portion was to be transverse to the old and double the capacity to seat a congregation of about 500. The foundation stone for this new portion was laid on Tuesday 23 May in the presence of about 150 persons.

The dimensions of the addition which is to be built are 64 feet 9 inches by 34 feet outside measure, and 22 feet in height from the floor. There will be a large octagon porch at the south end, and a porch in each corner where the new building joins the old. The foundation walls are 4 feet 6 inches in thickness, and the superstructure is commenced at 3 feet 6 inches, which will be diminished to 2 feet, after about 4 feet in height has been built. The style of architecture will correspond with that of the present erection.9

During 1864, several gentlemen of the choir made arrangements for a series of entertainments to raise funds for an organ for the church. At the first, the Revd Marryat spoke of the desirability of the church having “proper instrumental music. He also stated that: a member of the congregation had purchased an organ, which was now on its way from England, and would be erected in the church on the understanding that he would retain a lien on it if not paid for within a certain period.10

Who that person was is not clear. Colin Fenn, in an article published in the Norfolk Guild of Organists Journal of Autumn 199211 gives the purchaser as Matthew Turton, though it could have been John Newman senior. Newman was a well known shipping agent at Port Adelaide and trustee of the church. Turton was his clerk.12 The Newmans became associated more with the Woodville Anglican church but it is interesting to note the organ at St Paul’s arrived 15 months after the death of Newman’s son John Holden Newman at the young age of 26.13

The organ arrived in the Fort Regent on 27 January 1865.14 An organ loft was constructed by an un-named member of the choir. This individual also erected the instrument under the superintendence of Robert Daws of Adelaide. Of seven stops, it was first used for Divine Service 19 February 1865. It was said to be of very fine tone and the specification was given in the press:15

The debt on the organ was paid before the vestry meeting of April 1868. At the same meeting it was decided to build a new chancel.17 The organ gallery at the south end of the nave was removed and the organ moved to the old chancel near the pulpit giving the choir much more accommodation.18 Daws who had had the care of the organ since its importation, effected the removal and apparently made some important alterations. It proved “a good arrangement, the tones of the beautiful instrument being well heard in every part of the church to advantage”.19 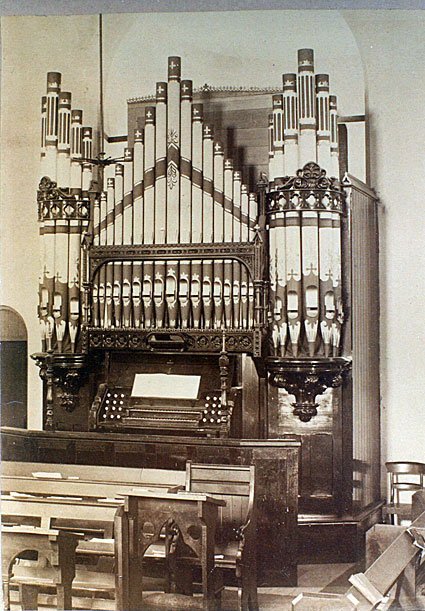 St Paul’s Anglican Church, Port Adelaide: organ when placed in the earlier church
[Photograph before 1905 from collection of David Shield]

Six years later, it became apparent that the church needed renovation and the organ needed attention beyond tuning. In September 1902 an earthquake was felt at the Port and apparently damaged the organ though the extent is unknown. Warden H.M. Burge wrote a letter to J.E. Dodd concerning repairs needed and the organist Frank Warhurst also wrote proposing alterations to the organ.22 Dodd had replied but, with the church in straightened financial circumstances, it would seem that no immediate action was taken.

Once it was determined that a new church was to be built the organ needed to be dismantled and stored. Dodd found the copy of the original letter had been confused with another, only part of the text remaining legible. Ever the opportunist he took the opportunity and resurrected the remnants of the previous letter and modified it to the times.23

He went further. In 1887 Hobday had added a second bellows to the original to supply wind. Supposedly to limit expense Dodd had argued that it was foolish economy and recommended their replacement with a new single bellows 5’6″ x 3’6″. He went further and indicated that when the swell was added no principal stop was used: I am not going to dwell upon the foolishness of this stop being excluded, but must say that for any professional Organ Builder to draft such a scheme it was madness. The Mixture on this manual is quite misplaced. It is a useless stop in such a scheme, & is also quite out of date…

He offered to replace the Mixture with a Principal at a cost of £12. Dodd then lent on the church: In the event of this not being done, I cannot undertake the care of the instrument, any longer at the present charge, & will have to raise my tuning fee the (sic) £15:15:0. I am sorry to have to take this step, but on going into the contract price, which at present is £12:12:0, I find that such a lot of extra work is entailed owing to the absurdity of the scheme that I am losing money on the organ.24

At the same time, he suggested the purchase of a water engine to replace hand pumping, which he regarded as “expensive and unreliable”.25 Although the water engine has since been replaced by an electric motor, the control handle is still in place.

The organ was overhauled cleaned and revoiced by Karel Dirksen in 1951.26 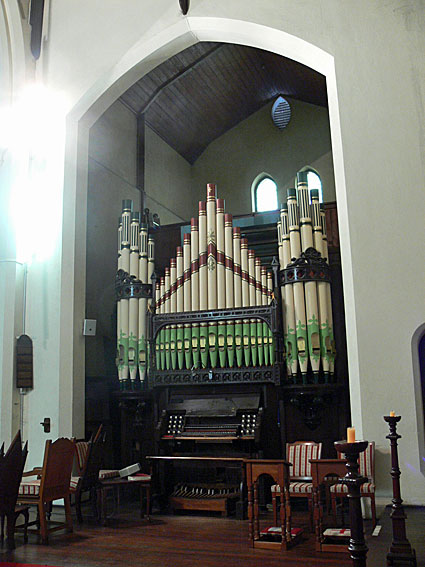 From 1980-1990 a concerted effort was made to raise funds for the organ. Over the period $27,000 was raised allowing for the complete overhaul of the organ by George Stephens plus the addition of the III rank Mixture to the Great in 1988. The Pedal Trombone was being worked towards but has not been installed. The facade pipes have also been redecorated, having been previously painted white; the design is based upon the original, but simplified.

11 Copy in a letter from Andrew Hayden to David Kinsela 17 May 1999 and forwarded to D. Shield.